Take Courage, It Is I! 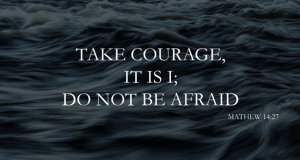 In the coming days, we don’t know what will happen or what to expect. Most of us are conditioned now to expect the worst. 2020 has been the year like no other, and it’s easy to find yourself wondering what else can go wrong. It seems like every time you turn around some new disaster is striking. Hurricanes, floods, tornadoes, pandemics! Do you find yourself wondering, “What is going on?!!”

There’s a great scene in the gospels that lends itself well to our current situation.

From Matthew 14:22-27: “Immediately he made the disciples get into the boat and go on ahead to the other side, while he dismissed the crowds. And after he had dismissed the crowds, he went up the mountain by himself to pray. When evening came, he was there alone, but by this time the boat, battered by the waves, was far from the land, for the wind was against them. And early in the morning he came walking toward them on the sea. But when the disciples saw him walking on the sea, they were terrified, saying, ‘It is a ghost!’ And they cried out in fear. But immediately Jesus spoke to them and said, ‘Take courage, it is I; do not be afraid.’”

There are other similar scenes, like the one where Jesus was actually in the boat with them, fast asleep during the storm, seemingly unconcerned with their dire situation. I like this one though because of the encouraging words, “Take courage, it is I; do not be afraid!” We all need to let those words really sink in, and wash over our hearts.

Jesus told his disciples that when they saw such things, to “strand up, and raise your heads,” not look downcast and be in misery. “There will be signs in the sun, the moon, and the stars, and on the earth distress among nations confused by the roaring of the sea and the waves. People will faint from fear and foreboding of what is coming upon the world, for the powers of the heavens will be shaken. Then they will see ‘the Son of Man coming in a cloud’ with power and great glory. Now when these things begin to take place, stand up and raise your heads, because your redemption is drawing near.” (Luke 21:25-28)

As I pray with the Matthew gospel reading, I’m struck with the fact that they saw Jesus walking on the water. They were fearing for their lives, being thrown around in the sea and storm, probably frantically doing whatever they could to stabilize themselves on the boat. Yet in the midst of all the chaos, someone SAW him, and pointed him out to everyone else. At first they didn’t recognize him and thought he was a ghost. But that’s when those beautiful words wash over them all – “Take Courage, It Is I!”

I’d like to hope that in the midst of the storms we are in, I would be one of those disciples who see Jesus out on the water, but learning from this previous experience would actually know that it is HIM. I’d look to him with fear in my eyes, pleading for his help. And even though I know it is him, I would still want to hear him say, “Take Courage, It Is I!”

We are living in the kind of times Jesus was talking about in Luke’s gospel. I was reading something the other day that talked about this. “In an age of change, the Church needs to pay attention to the modes by which she carries on her graced battle to be sure she is not ‘fighting yesterday’s war,’ using strategies that for whatever reason are outmoded and have become ineffective. In a time that could be called a change of the ages, this duty becomes urgent. We are currently living in such a time.” (From Christendom to Apostolic Mission, Univ. of Mary Press) Be courageous! It’s times like these in our past that have reshaped history.

There’s a lot that has happened in the past couple weeks, but most notably the confirmation of a new Supreme Court Justice, Amy Coney Barrett. This is a historic advance for conservative values. See the article below with more details.
CNA Article – Amy Coney Barrett Confirmation

And also in this issue, some encouraging words from Father Dave Pivonka, President of Franciscan University. What can we expect on the morning after the election?